Black Kakutan, previously owned by Shuga, one of the four emperors of the "Qilin Realm". It's power enables the user to blend in with the shadows, and moving from one to another in a split second. The user can also produce pysical shadows, as shown in the fight between Kuroki with Shuga. it manifests as needles, or armour. 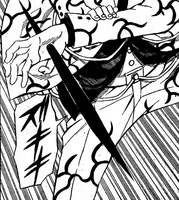 Shadow Needle
Add a photo to this gallery

Retrieved from "https://blazerdrive.fandom.com/wiki/Black_Kakutan?oldid=4951"
Community content is available under CC-BY-SA unless otherwise noted.