God Stand is a Mysticker which allows the user to generate electricity similarly to Electric Mysticker. The difference between the God Stand and Electric Mysticker is the former is capable of releasing endless amounts of electricity while the latter can only produce a set amount. Blazers often utilize his Mysticker by running the current generated through a metallic object or conductor, such as wire. 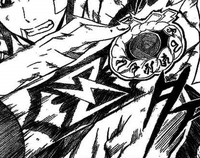 Retrieved from "https://blazerdrive.fandom.com/wiki/God_Stand?oldid=4953"
Community content is available under CC-BY-SA unless otherwise noted.