He is the best friend of Ginga and the one that offers Daichi an explanation of the world of Blazers. He recently joined Daichi's life in order to help him now that his brother disappeared, changing Daichi's daily life forever. He is good with Healing type stickers and is seen carrying around a huge sword which is also a mysticker called Necromancer. He uses an unnamed, one seat vehicle that looks like a modified modern sport/street motocycle in which he doesn't use his hands to drive. Kuroki has battled Shuga of the Black Kakutan, and with him being a battle genius, he has recently defeated him.

Kuroki has dull, pink hair and tan skin. His hair covers his eyes so it is unknown what his eye color is. He wears a navy, eight-point cap, a navy swallowtail jacket with his left sleeve rolled up, and red and white, vertical-stripe pants. He has a small, brown shoulder bag strapped to his back and wears steel-toed navy shoes. On both his shoulders is are yin-yang patches and on his hat are three pins of different designs.

Kuroki is a quiet, laid back, patient young man. He takes his job very seriously however is able to joke around at times. He rarely ever gets upset. He likes to tease Daichi whenever he can though he does care for Daichi and will come to his aid when he's in trouble. His two biggest fears are angering his Section Leader, Melon, and dogs. Whenever he is near a dog or even sees a dog, he becomes completely disabled and falls over in a comical fashion.

Necromancer is a sword mysticker, meaning it summons a weapon when used. This sword devours evil souls. He is seen to be able to use his sword necromancer to suck his opponent's evil spirit out of their bodies; Necromancer doesn't attack the body, it attacks the soul. He is also able to put a darkness mysticker on it to make it longer and it can split up into a bladed whip. Necromancer can apparently drool. 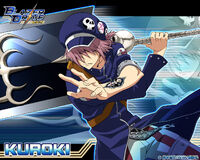 Add a photo to this gallery
Retrieved from "https://blazerdrive.fandom.com/wiki/Kuroki?oldid=4750"
Community content is available under CC-BY-SA unless otherwise noted.